„Coining value over the centuries”

Our mission is to maintain the 1,000-year traditions of Hungarian minting and to preserve and present the values of Hungarian history and culture.
With due regard to the rich heritage of Hungarian minting, but at the same time mindful of modern tastes and wishes, we create products of the highest quality, using innovative solutions and modern equipment.

Our company’s main activity is to manufacture the circulation coins ordered by the MNB for circulation purposes, as well as to manufacture and distribute the commemorative coins issued by the MNB. Above and beyond our main activity, we also produce unique, artistically designed medals using state-of-the-art minting equipment and the in-depth knowledge of our minting experts.

Manufacture and distribution of commemorative coins

With its issues of commemorative coins, the Magyar Nemzeti Bank celebrates notable anniversaries of major figures from Hungarian history, culture, science and the arts, and commemorates important Hungarian and international events. The MNB has exclusive issuing right in Hungary; in accordance with its orders, we produce the commemorative coins and – following issuance by the central bank – sell them as the initial distributor.

Manufacture and distribution of circulation series

Our company also produces medals based on custom orders, in accordance with the customer’s wishes and specifications, with individualised designs. These custom medals are ideal for special occasions, important events, company anniversaries, conferences, etc.

Medals and coins for special occasionsk

The medals and coins produced by our company are works of art, celebrating the great figures of Hungarian history, culture, arts and science. They are suitable both as company gifts and for collecting. Our range of products features gifts for many important kinds of family events and some can be customised with special engraving or photo-engraving services.

The history of the Hungarian Mint is intertwined with the 1,000-year history of Hungarian minting, which started with denar coins struck by King Saint Stephen. 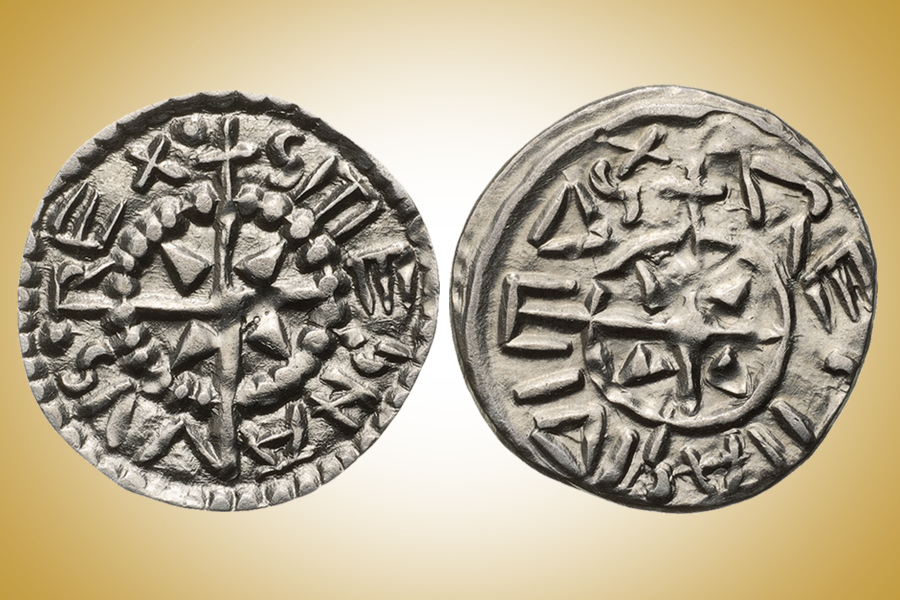 I.The first Hungarian coins date to the founding of the Hungarian state: St. Stephen I (r. 1000-1038) had the first Hungarian coins minted of silver at the start of his reign around the year 1000, patterned on the Western European denar system. The denar was the main denomination in Hungary for the next three hundred years, along with the ‘obulus’ (half of a denar). 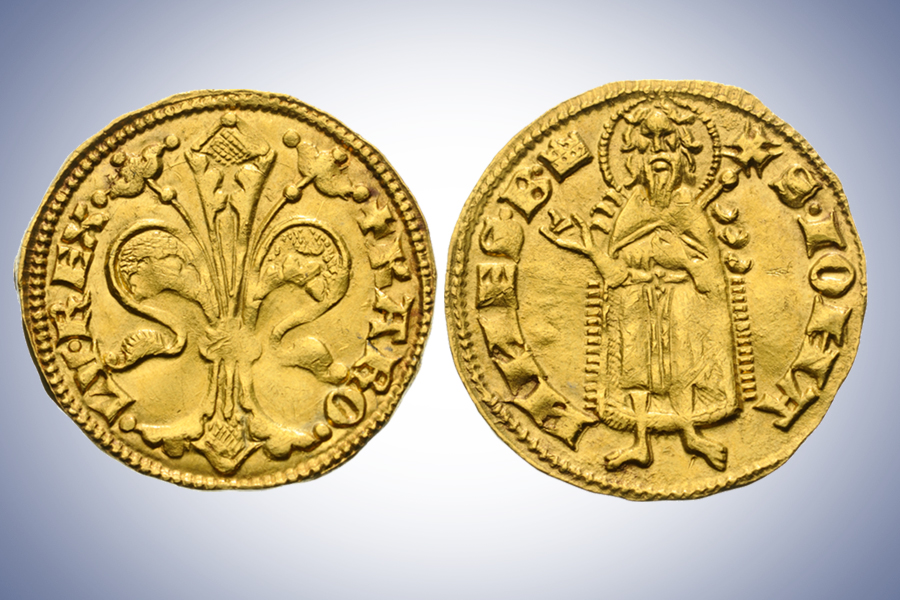 II.King Charles Robert (Charles I, r. 1308–1342) reformed Hungary’s monetary system and established several minting chambers, including the most important one in Körmöcbánya in 1328, which is considered the historical and professional predecessor of the Hungarian Mint. He had the first Hungarian gold forint minted around 1325, probably in Buda. The first Hungarian gold forint was patterned on the fiorino d’oro of Florence, which is also the root of the Hungarian word ‘forint’. 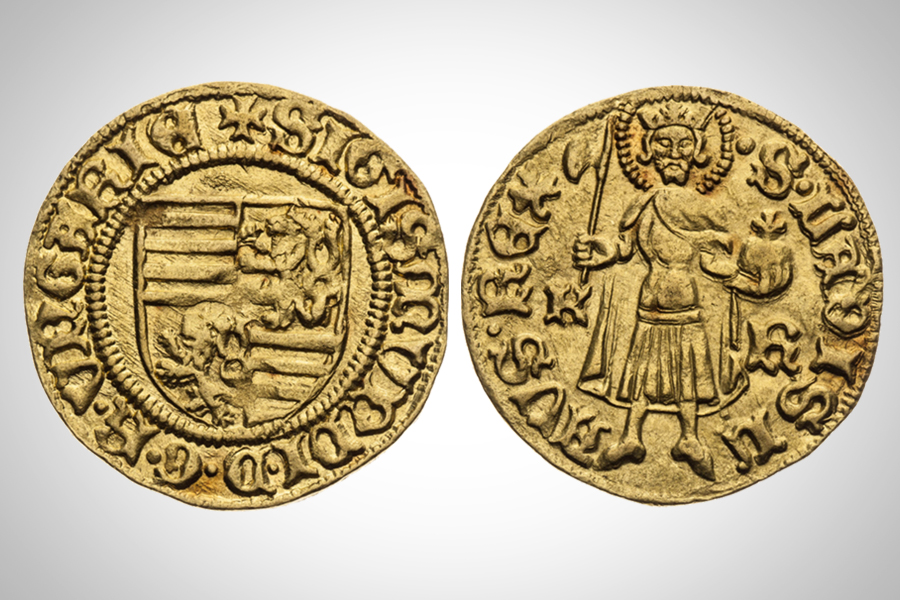 III.Under Sigismund of Luxembourg (r. 1387–1437) the chamber system was consolidated, and the mint and master marks were standardised. Around this time, the first piedfort coins appeared, which were not used as circulation coins but rather as gifts. 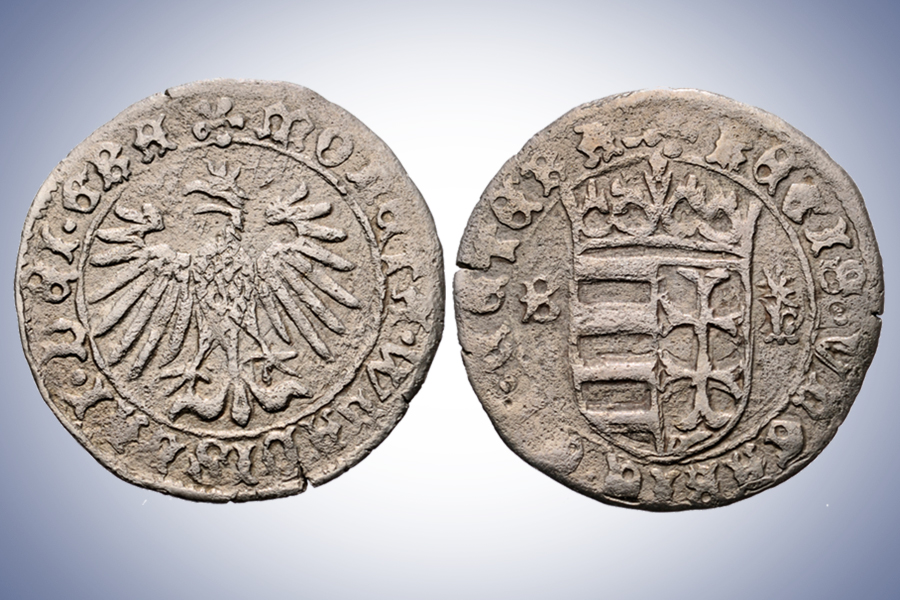 IV.During the short reign of Vladislaus I (r. 1440–1444) the currently used official Hungarian coat of arms appeared on the denar for the first time, because the two symbols, the stripes and the patriarchal cross with trimount were then combined, and a crown also appeared above the coat of arms. 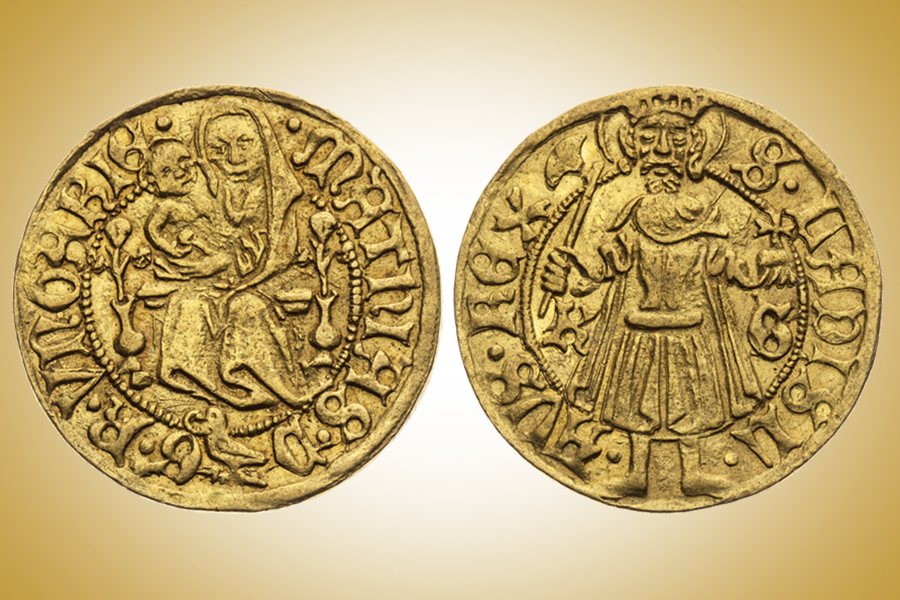 V.As part of the economic reforms of Matthias I (r. 1458–1490), a gradual currency reform was started in 1467. The mints in Buda and Kassa were shut down in 1472. Standard features of coins were introduced by Matthias, with the Virgin Mary, Hungary’s patroness, on the front of the gold coins and back of the silver coins, holding the infant Jesus. This image remained on Hungarian coins for hundreds of years and was last found on circulation coins with the 2 pengő minted in 1939. Matthias also reintroduced the silver groat, which had been out of use since the time of Louis the Great, and which were more valuable than the denar. During this period, they started calling the forint by the name ‘ducat’, in reference to the gold coins of Venice. 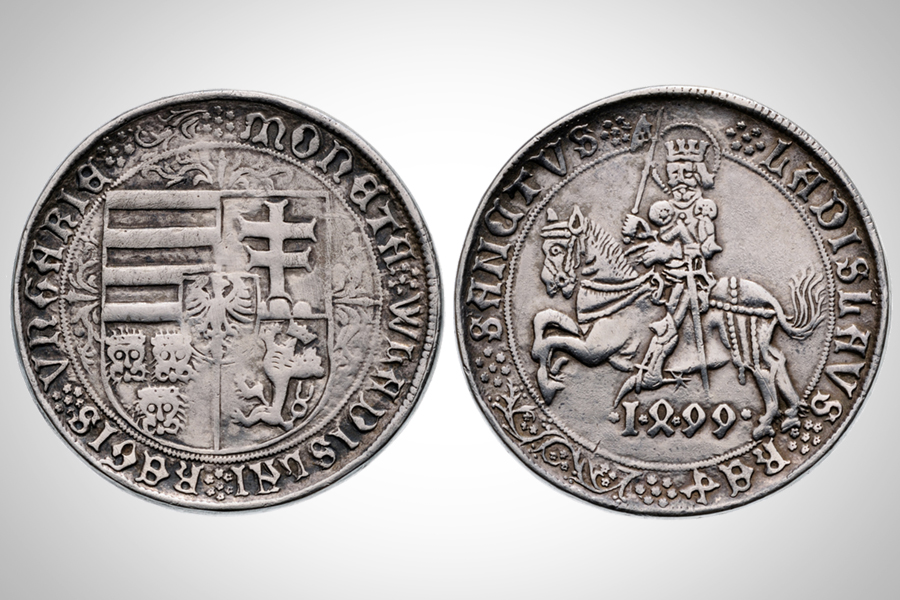 VI.Vladislaus II (r. 1490–1516) continued the minting practices of Matthias I and his primary mint was located in Körmöcbánya. His name is also associated with introduction of the ‘guldiner’ coins, seen as the predecessor to the later ‘thaler’ system. During his reign, the date first appeared as an element on Hungarian coins in 1499. 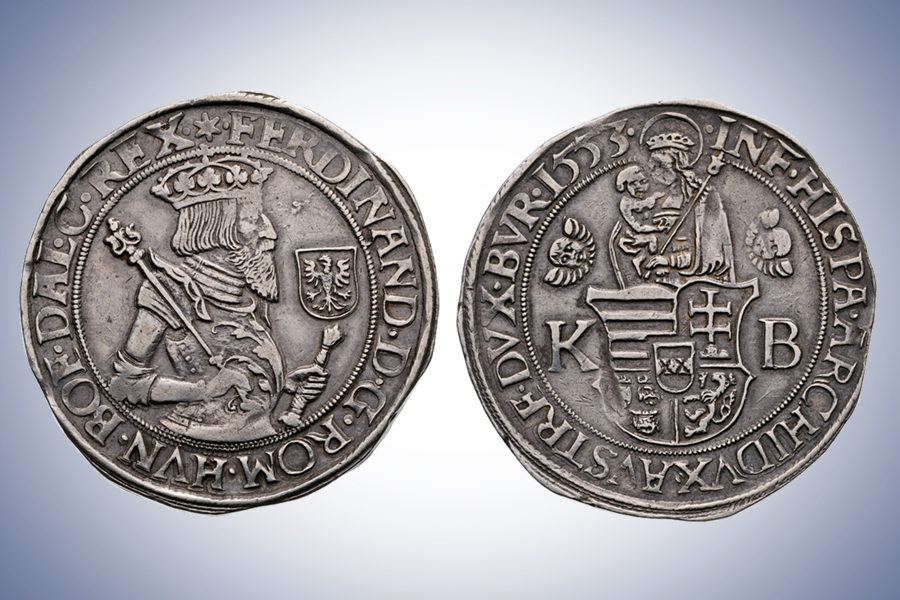 VII.For the administration of Hungarian monetary issues, Ferdinand I Habsburg (r. 1526–1564) established the office of Hungarian Chamberlain in Pozsony (present-day Bratislava) patterned on the Austrian system. It functioned as a legally independent institution, but in practice was subordinated to the Royal Chamberlain in Vienna, as the central monetary authority of the Habsburgs. He minted his first thaler coin in 1553 in Körmöcbánya. With the introduction of the thaler system, traditional medieval minting came to an end in Hungary. 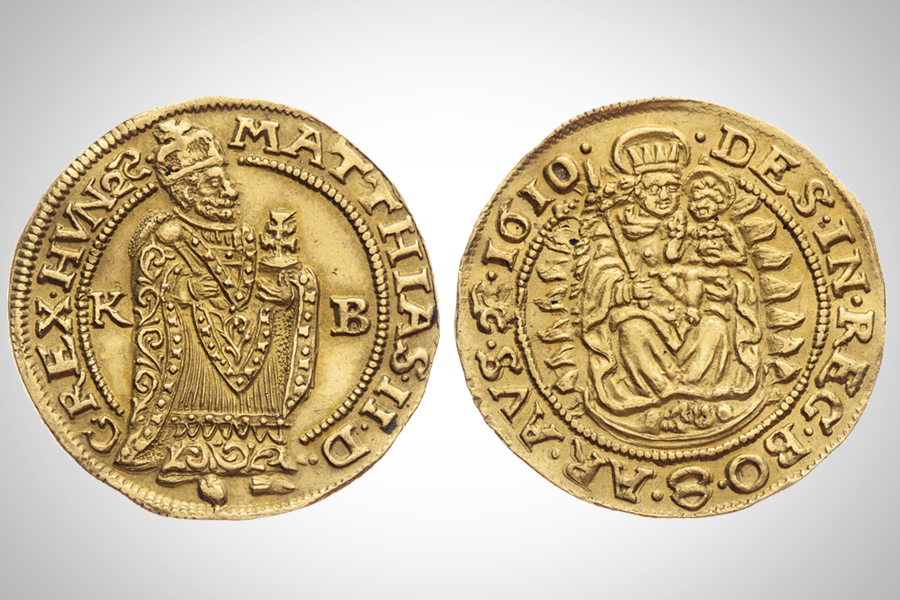 VIII.At the end of the 16th century, the figure of Saint Ladislaus disappeared from Hungarian gold coins and a portrait of the reigning sovereign appeared on the front of the coins. Responsibility for the mint in Körmöcbánya was transferred to the treasury, under the direction of the court in Vienna. 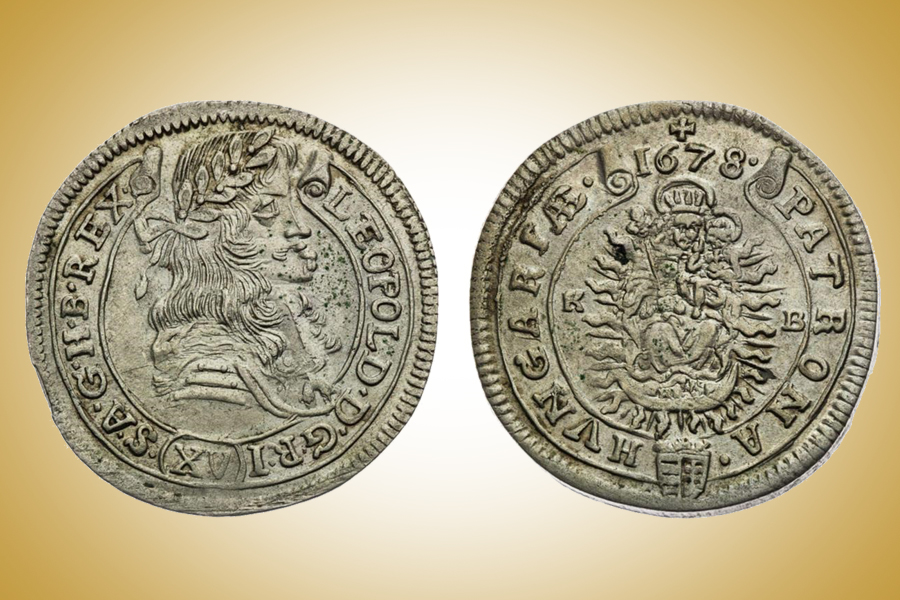 IX.Leopold I (r. 1657-1705) introduced small coins known as krajcár (Kreutzer) in 1659. During that period, the Hungarian coat-of-arms appeared on the coins for the first time, with the issuer officially acknowledging that the precious metal value of the coin was different than its nominal value. Both Roman and Arabic numerals were used to indicate denominations. 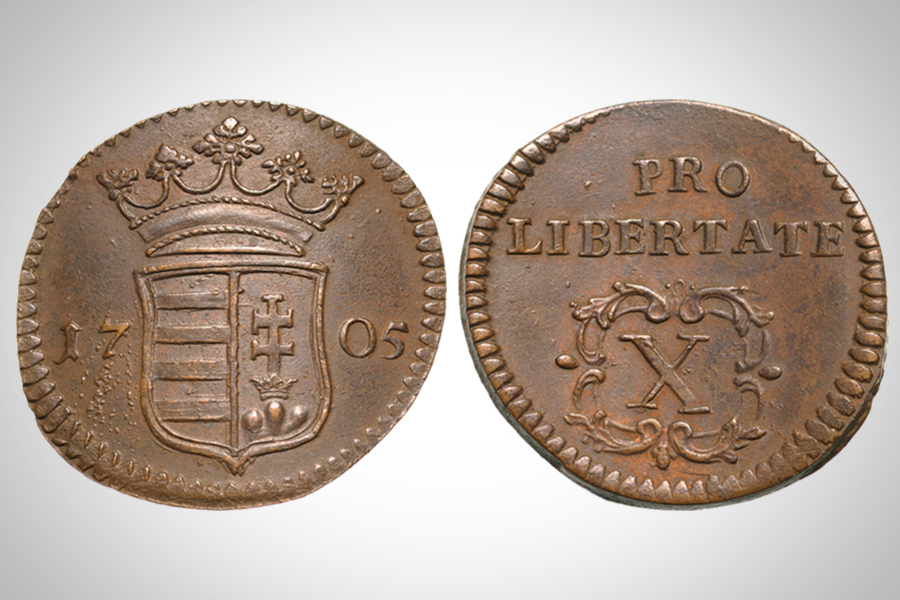 X.The minting practices of Francis II Rákóczi (1703–1711) are a separate chapter in the history of Hungarian money. His copper ‘poltura’ coins were issued in several denominations, bearing his motto ‘PRO PATRIA ET LIBERTATE’. Drawing on this, the coin were also referred to as ‘libertás’. Only a very small amount of gold coins were issued. 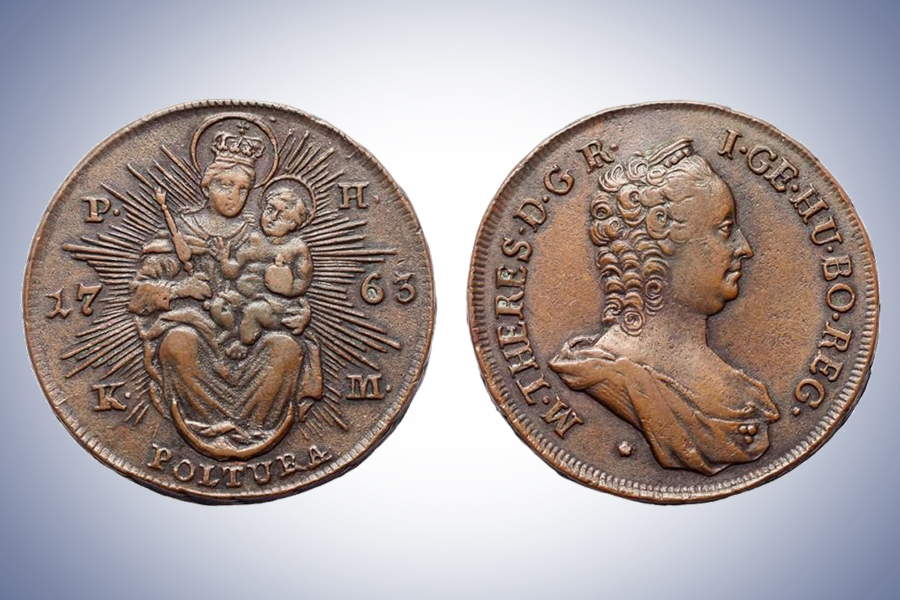 XI.Under the reign of Maria Theresa (r. 1740–1780), further efforts were made to unify the monetary practices of the Habsburgs. Smaller copper denomination were introduced in 1760. In 1766, the mint marks were changed to an ABC system, with the Hungarian mints Körmöcbánya as ‘B’, Gyulafehérvár as ‘E’ and Nagybánya as ‘G’. The thaler remained the primary denomination all the way until the first half of the 19th century. 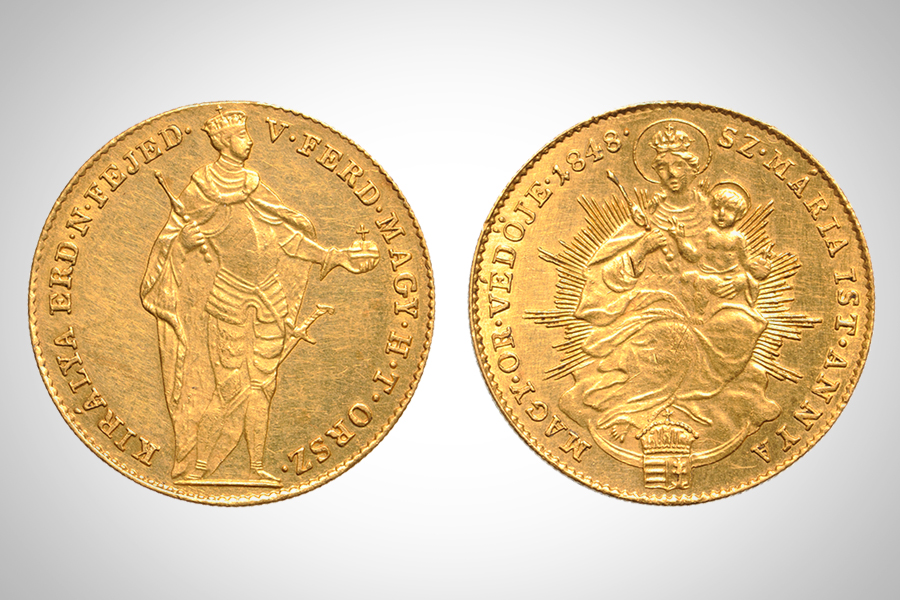 XII.During the Revolution and War of Independence of 1848–1849 Hungary’s financial matters were administered independently and for the first time ever the legends on the coins appeared in the Hungarian language. Instead of the Imperial mint marks, the traditional Hungarian mint marks were used again. Ducat coins were struck of gold, while silver was used for the 6, 10 and 20 krajcár coins, and copper for the 1 and 3 krajcárs. 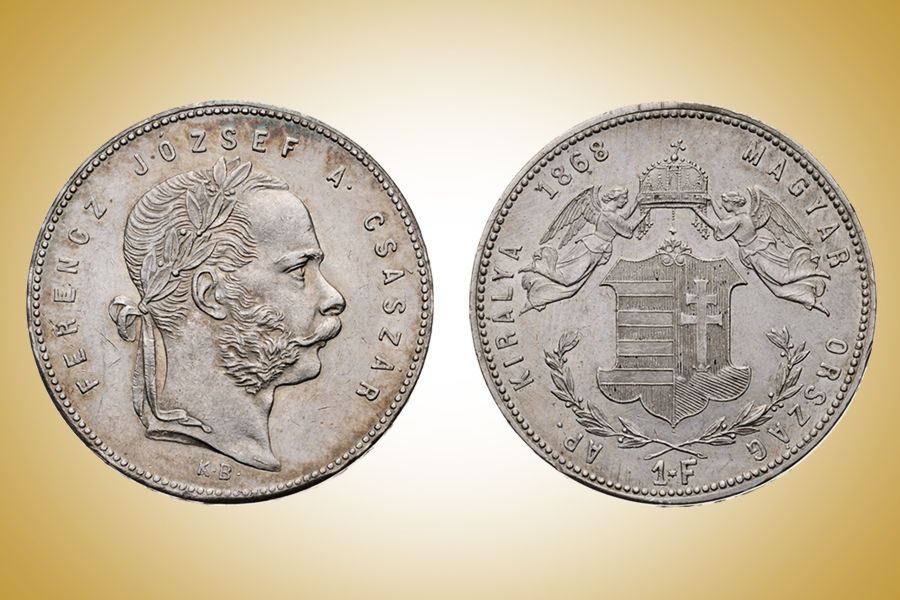 XIII.After the Revolution was defeated, Franz Joseph (r. 1848–1916) abolished Hungary’s independent finances and a portrait of the sovereign and the Austrian or Imperial coat-of-arms was used on the coins. This changed with the Compromise of 1867, after which Hungarian legends, and the Hungarian crown and coat-of-arms was used on the coins. The alphabetical mint mark system used in the Austro-Hungarian Empire was abandoned and the traditional mint marks were used again, with K.B referring to Körmöcbánya and GY.F. to Gyulafehérvár. 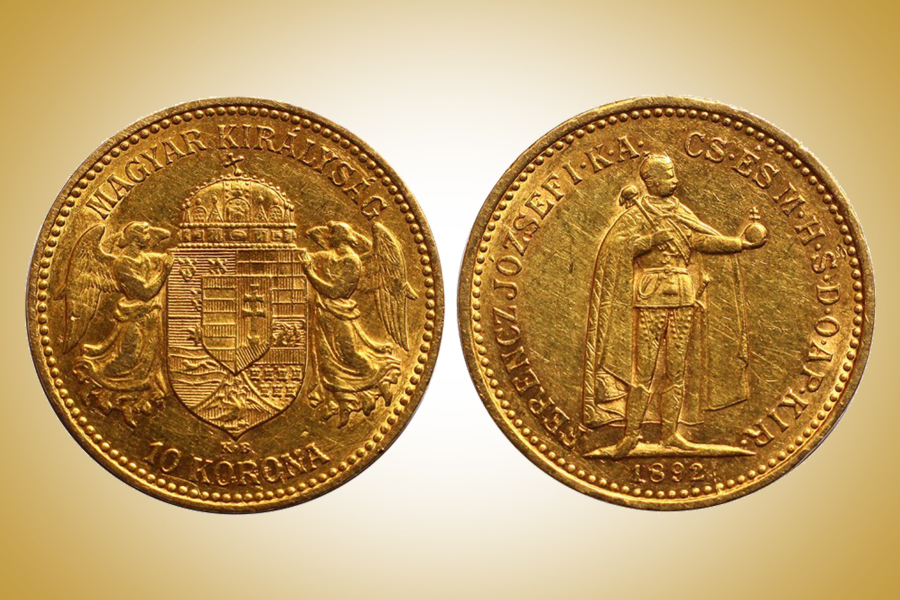 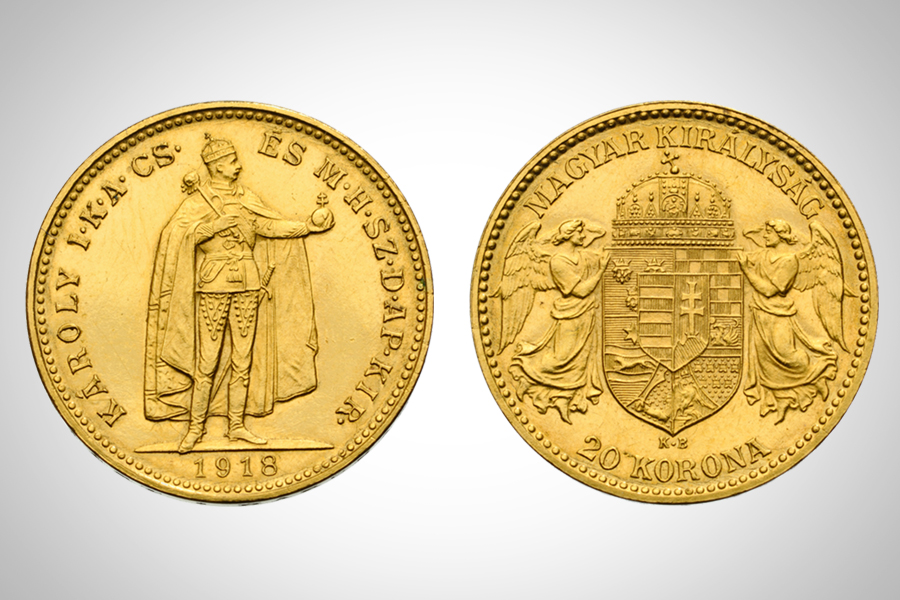 XV.The First World War led to devaluation of the korona. The last Hungarian king, Charles IV (r. 1916–1918) minted the last gold coins in Hungarian history, the 20-korona coin, but these were never put into circulation. The last silver korona was minted in 1916, at the Royal Mint of Körmöcbánya, as the last remaining Hungarian mint. 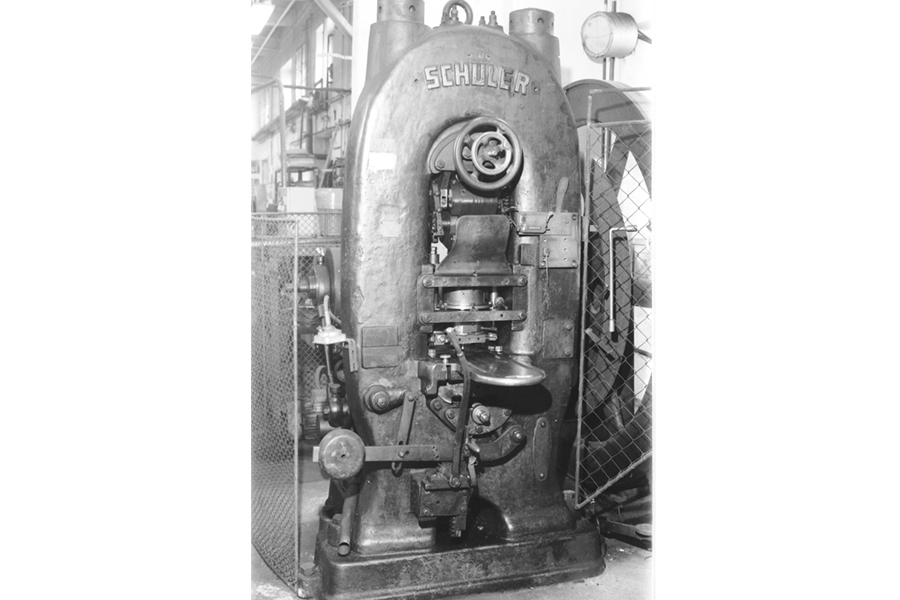 XVI.In November 1918, the equipment and machines of the Körmöcbánya Mint were removed to Budapest, along with some of the personnel. The machinery was installed temporarily, but was only needed for a short time due to the rising inflation of the korona, and the mint mark K.B. was still used on the 10- and 20-fillér coins that were minted at that time. 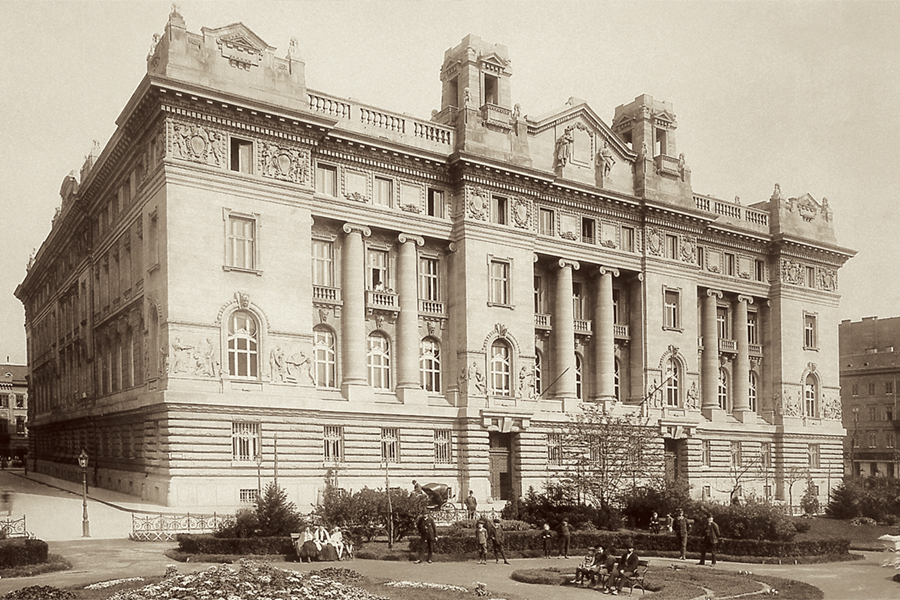 XVII.In order bolster the Hungarian economy and monetary system which was reeling from defeat in the war and the Treaty of Trianon and to stabilise the korona, the Magyar Nemzeti Bank was founded in 1924, as Hungary’s first independent central bank. 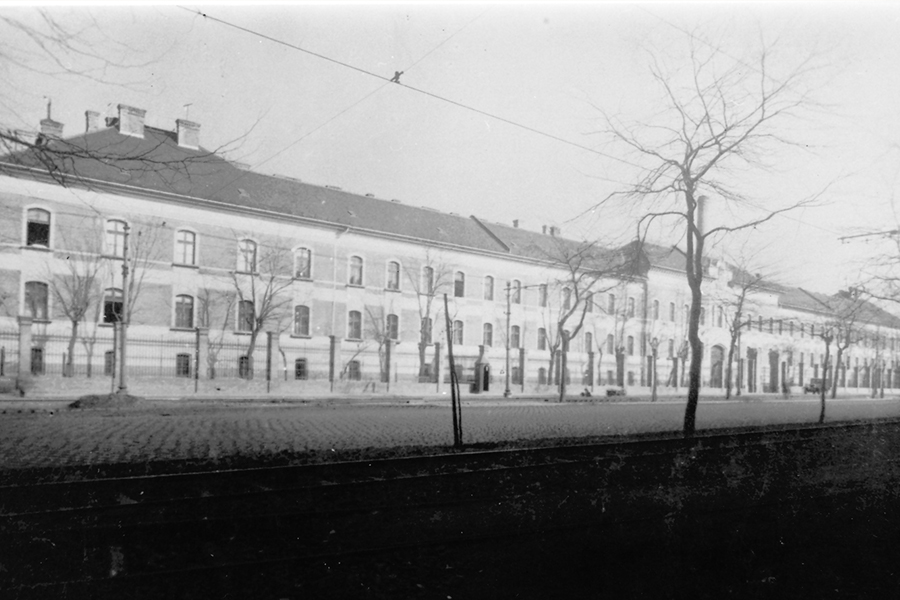 XVIII.A new currency was launched in 1925 upon adoption of the law on the introduction of the ‘pengő’. Similar to the korona, the pengő was a gold-based currency, which was divided into 100 fillérs. The new mint in Budapest was also established in 1925, with the name Royal Hungarian State Mint. From that time onwards, the mint mark BP. is found on Hungarian legal tender coins. The coins in the pengő currency system were produced at the new mint in Budapest. 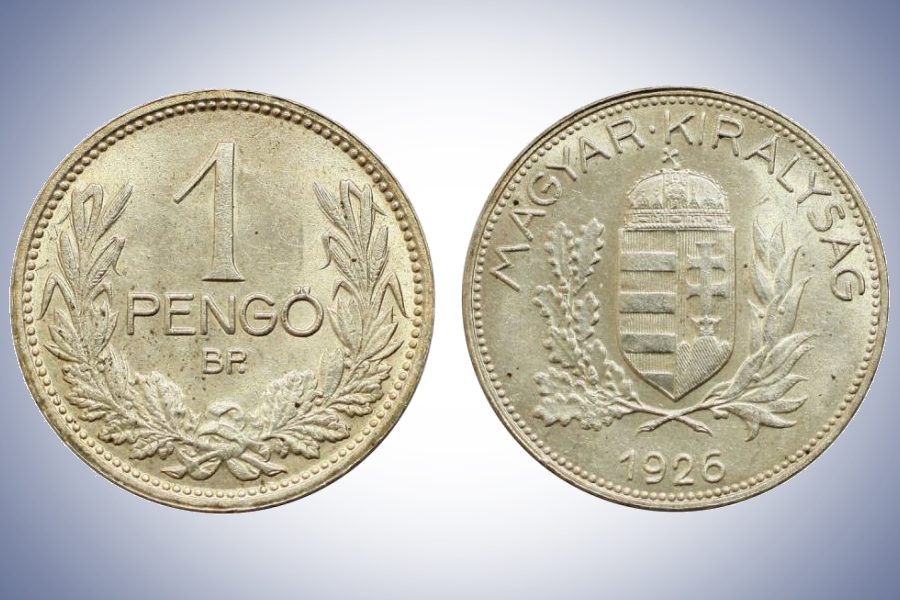 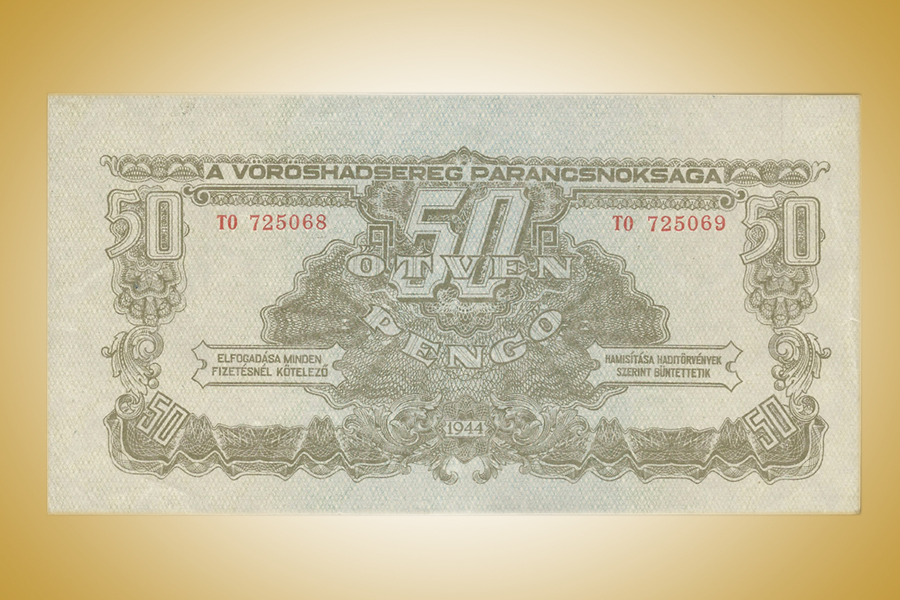 XX.During the Second World War, metal money essentially disappeared, and the mint was forced to end its work in December 1944. After the siege of Budapest, the mint began production again, but due to the rising inflation there was less and less need for small denomination coins. In what remains one of the worst cases of hyperinflation ever seen, the pengő lost all of its value in the span of one and a half years. 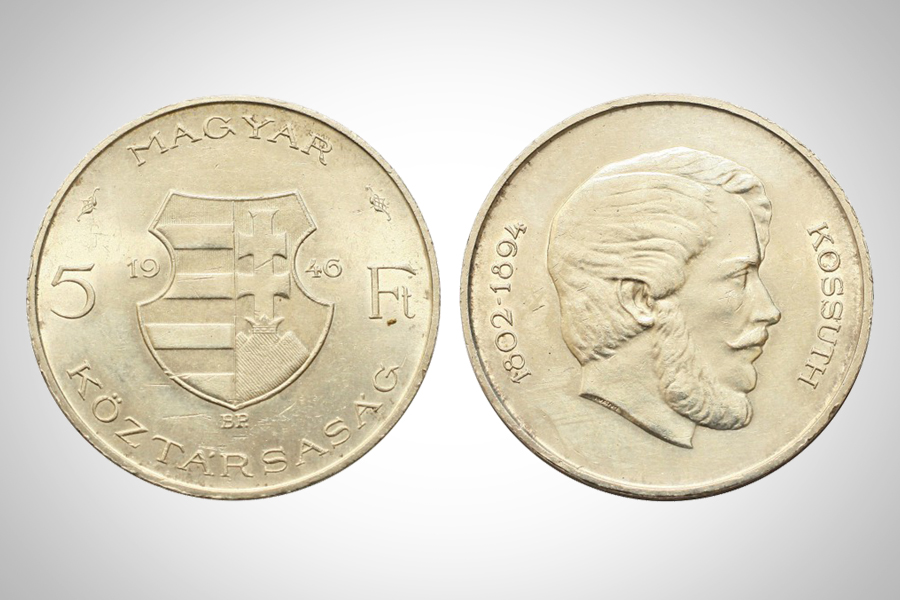 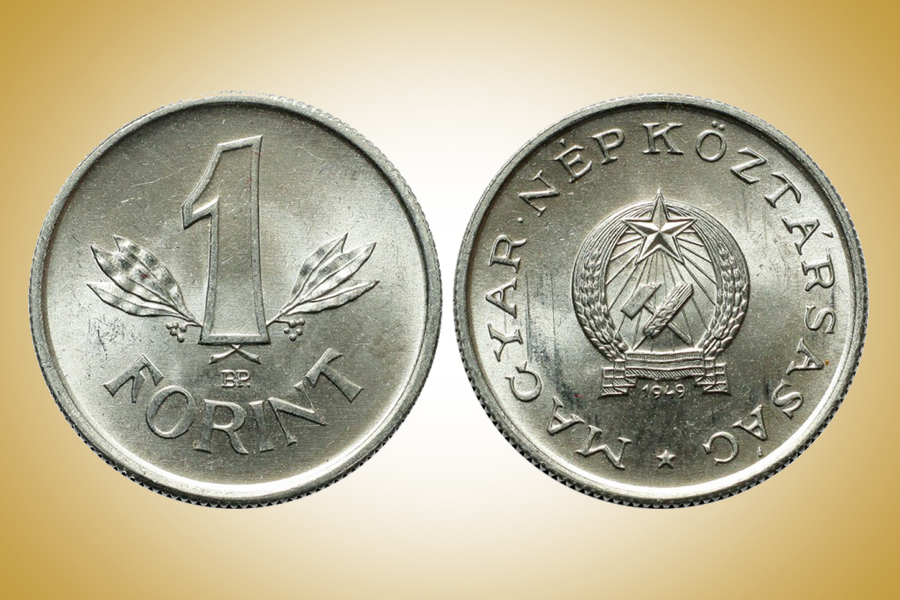 XXII. Starting from 1 February 1949, the mint in Budapest continued operating under the name State Mint National Enterprise. Several small companies from the precious metals industry were merged into the mint, and thus in the socialist system, the State Mint was responsible for the production of badges and ornamental objects and was also a key jewellery manufacturer, in addition to striking coins. 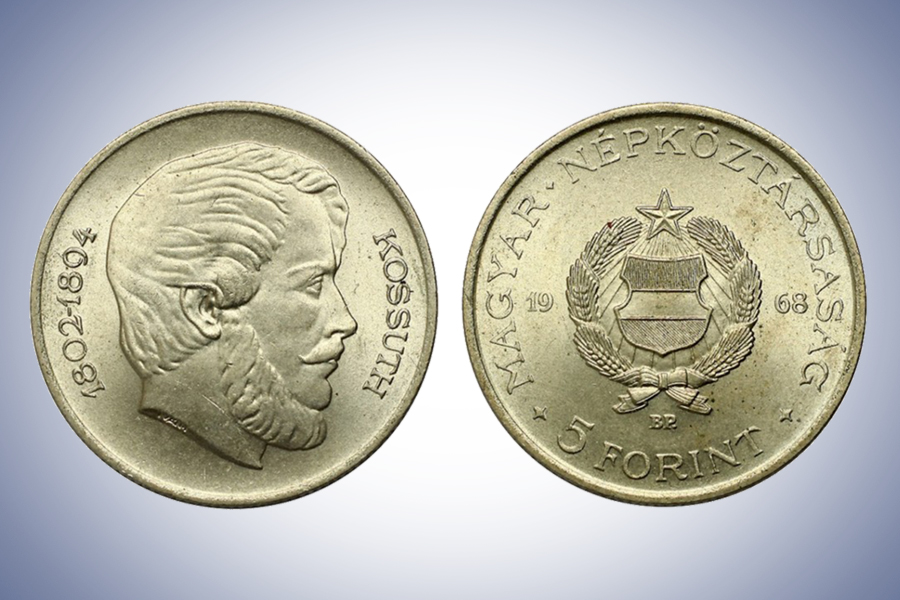 XXIII.In 1968, the MNB took over the exclusive right to issue metal money from the Ministry of Finance (up until then the central bank had only had the right to issue banknotes and put coins into circulation). 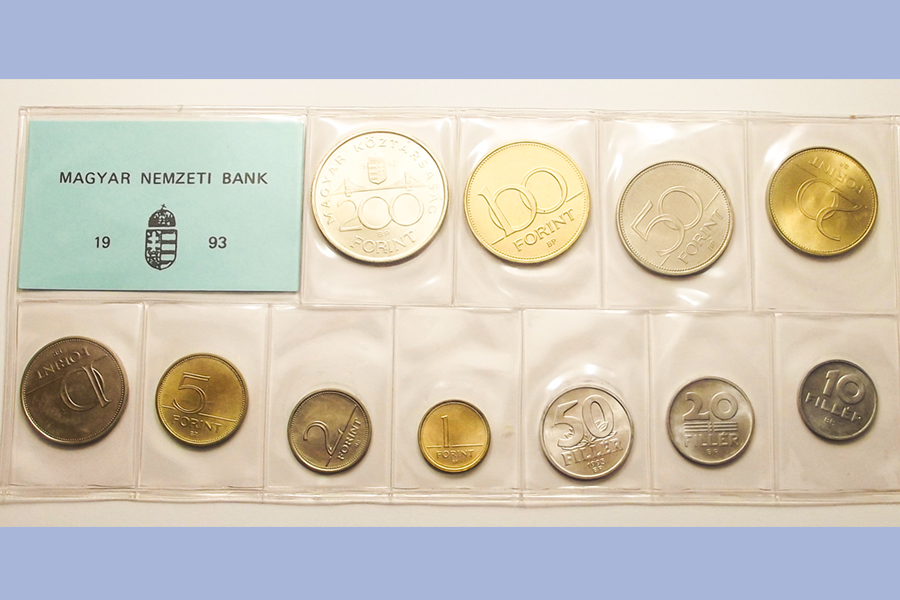 XXIV.After the end of the socialist era, the series of forint coins was completely renewed and a series of denominations was issued with the silver 200-forint in 1992 and the 1-, 2-, 5-, 10-, 20-, 50- and 100-forint coins in 1993, which have uniform materials and appearance. The denominations starting with the numeral 1 bear the Hungarian coat-of-arms, while those starting with 2 depict typical Hungarian protected plants and denominations starting with 5 show protected birds. The coins were designed by István Péter Bartos and István Kósa. The 2- and 5-fillér coins were withdrawn from circulation on 30 September 1992 by the central bank. 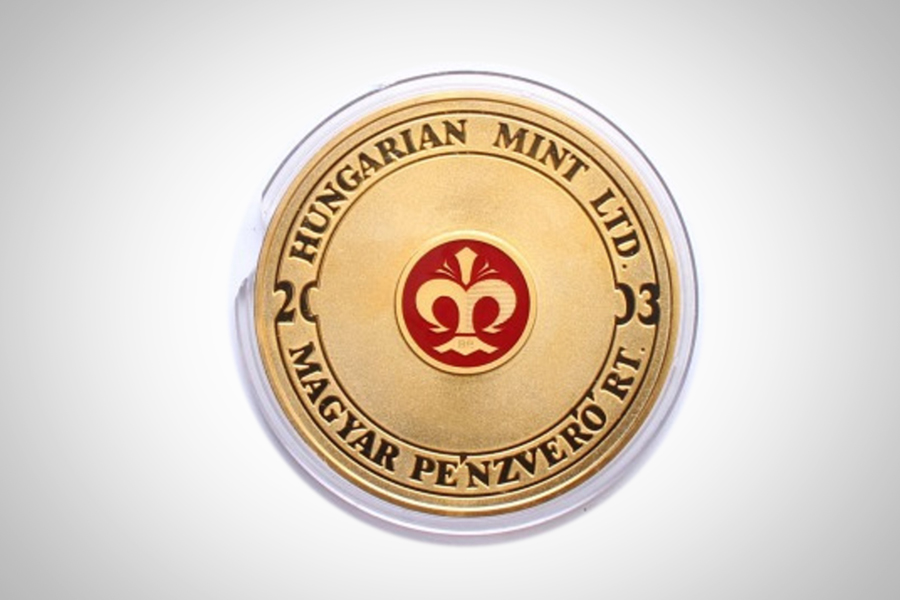 XXV.In the summer of 1992, the state mint was reorganised and its main activities were separated. An independent company was formed for the production of coins, both circulation and commemorative, under the name Pecunia Rt., with the Magyar Nemzeti Bank as the majority owner and sole owner after 1998. Since 1993, the company has operated as Magyar Pénzverő Rt. (Hungarian Mint Ltd.) 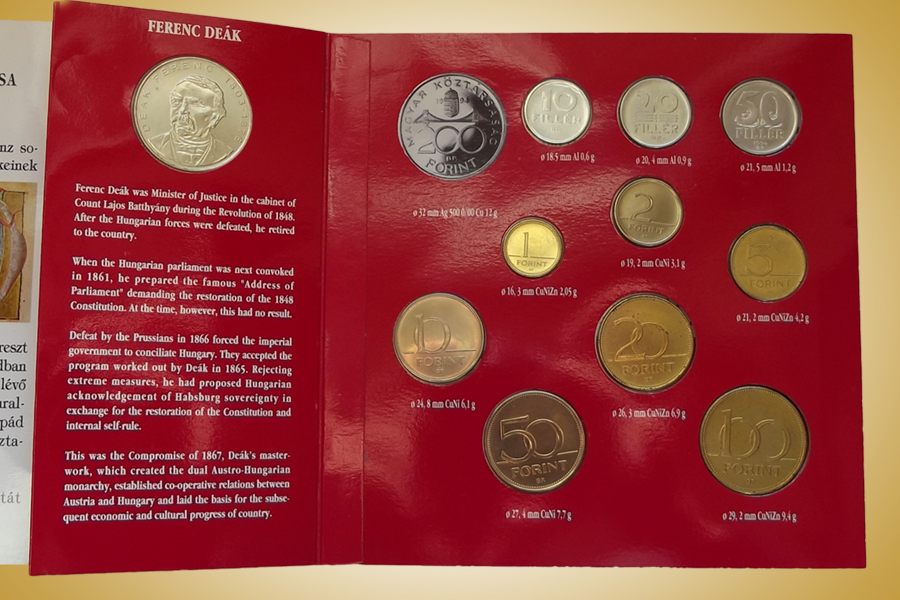 XXVI.On 30 September 1996, the 10- and 20-fillér coins were withdrawn from circulation, and the same occurred with the 50-fillér coins at the end of September 1999. With this, the fillér ceased to function as a means of payment, but it continues to exist as a unit of calculation for the forint. On 21 October 1996, a new 100-forint – the first bicolour coin ever issued in Hungary – was introduced, taking the place of the 100-forint coin issued in 1993. The 500 millesimal (half silver) 200-forint coins were withdrawn in April 1998 and replaced with the bicolour, bimetallic 200-forint coins depicting the Chain Bridge, which were put into circulation on 15 June 2009. 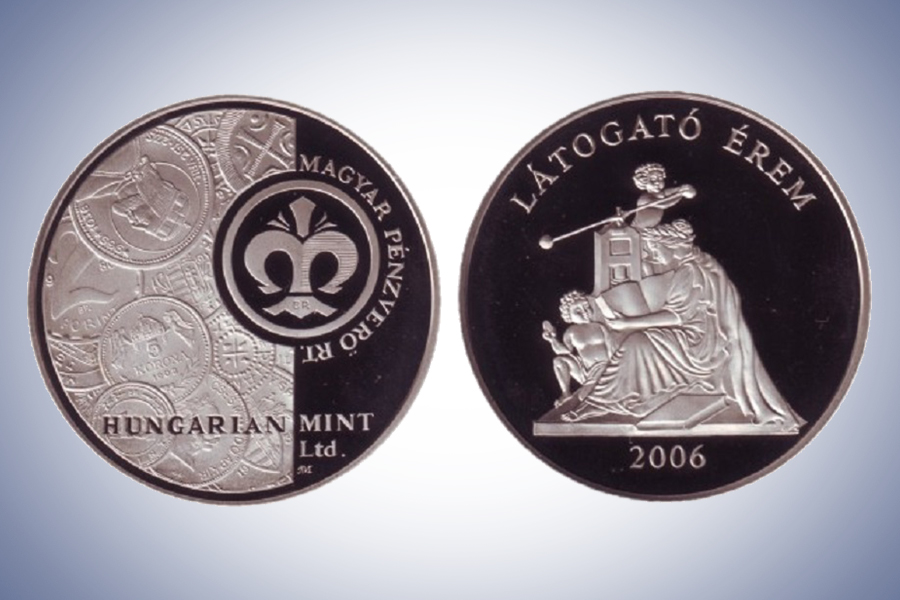 XXVII.In November 2001, MNB Érmekereskedelmi Rt. was merged into the Hungarian Mint, and consequently the Mint’s activities now also include sales of the commemorative coins issued by the MNB, as well as their production. The company was transformed into a close company in 2006. 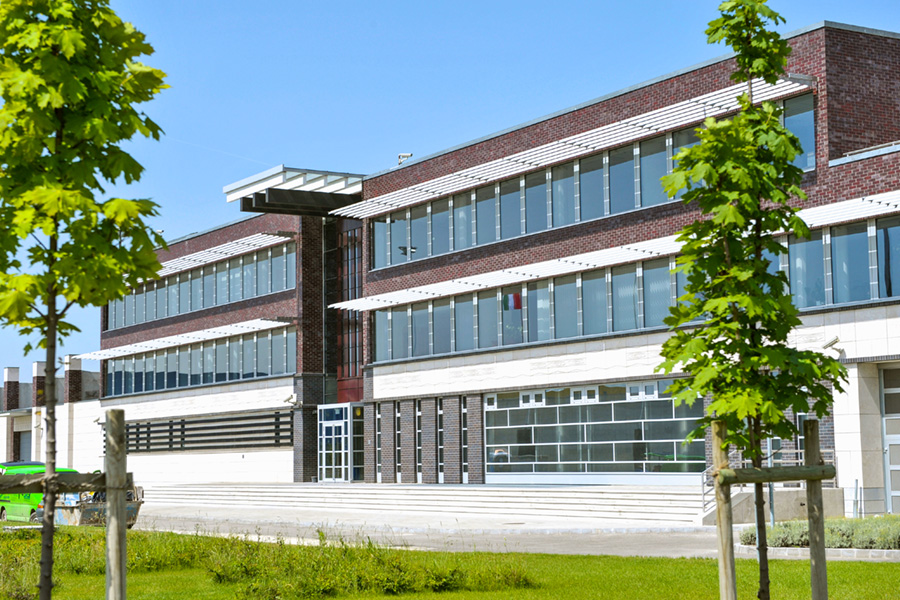 XXVIII.In March 2008, the Hungarian Mint moved to new headquarters at the new Logistics Centre of the Magyar Nemzeti Bank.

Get quality from the source.
Learn more about the Mint’s guarantee!

GET TO KNOW US

Click on the ‘More…’ button for more information on our company’s structure and personnel.

MINTING TECHNOLOGY – HOW ARE MEDALS AND COINS PRODUCED?

How are coins made? Learn about the process, from the design stage all the way through to packaging.

Keep reading
Cookies To make this site work properly, we sometimes place small data files called cookies on your device. Most big websites do this too.
Accept